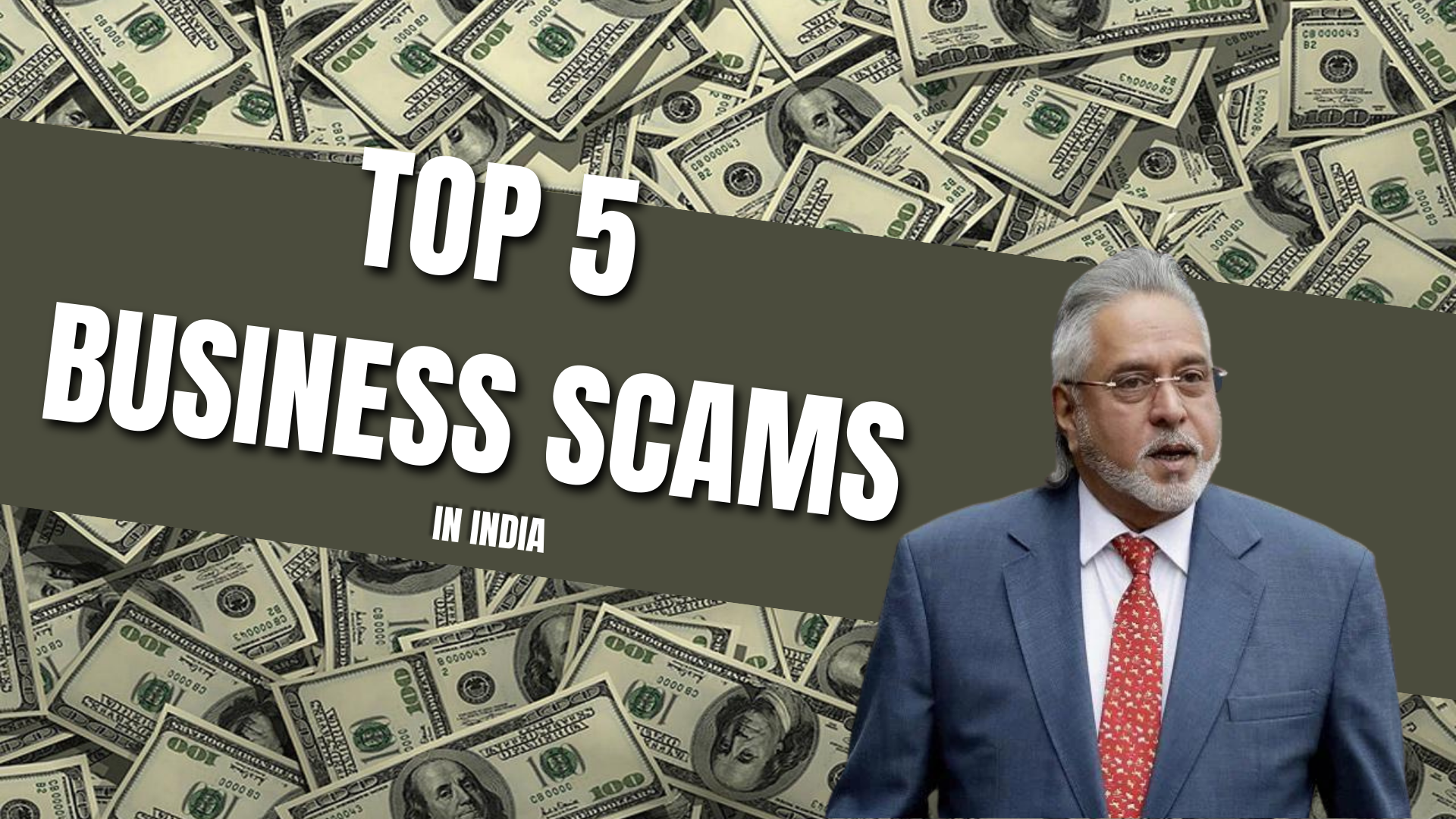 The word “Scam” is commonly used in today’s world, meaning an act of fraud carried out by a person in order to deceive the law to gain high profits in their business. The scam is done deliberately by keeping the intentions in mind of any dishonest legal scheme. These fraudulent actions lead to the breaking of the law that directly affects a particular consumer or a business group. Scam hinders trust and violates the area of faith in the law. A scam has both civil and criminal factors, which results in different sets of penalties. Given below are India’s Top 5 Business Frauds:

ABG Shipyard has been a shipbuilding and repair-oriented business since 1958. They expanded their business in Gujarat with their former chairman, Rishi Kamlesh Agarwal. The company was subjected to committing one of the biggest frauds of 22,484 crores, which was called the ABG Shipyard Bank Scam. The company took the loan between 2012- 2017, which was later confirmed by the bank, and was not used for the given purpose as mentioned to the bank. The company also took loans during the 2008 global deflation caused due to the financial crisis. It took advantage of the time and fulfilled its personal demands, most possibly tax compensation.

In 2016, the banks started doing audits and then later on it was found that the company committed a scam of 22000 crores. Standard Chartered Bank filed a criminal complaint against the ABG Shipyard company for committing fraud of 200 crores. The loan was taken on a short-term basis in 2012. Due to the occurrence of global deflation, the company has also suffered a financial crisis, causing them to be unable to pay back their loan which declared them a non-performing asset. A complaint was filed by CBI in January 2022, which was followed by the clarification of the SBI FIR.

Nirav Modi PNB Fraud is yet another one of the biggest corporate frauds in India. The scam was of 14,000 crores rupees committed by a well-known designer and jeweler, Nirav Modi. Nirav Modi was a jeweler and in order to expand his business, across the countries he took loans from foreign banks. He made a fraudulent LOU (Letter of Undertaking). A letter of undertaking is proof that if Nirav Modi won’t be able to repay the amount he has taken, then the bank’s foreign branch is allowed to ask for the same amount from the Indian branch and PNB was the bank involved. But when it was asked, there was no such LOU found, named under Nirav Modi. And due to this PNB handed over the case to CBI for further investigation.
At present, the CBI is taking charge of Nirav Modi’s properties and asking them to repay the amount he has taken as an act of fraud. Though Nirav Modi is now in jail. He tried pleading for bail but has not received any success yet.

Vijay Mallya was the face of a famous money laundering case of 9,000 crores. After the death of Vijay Mallya’s father, he took over the family business and started expanding it. He turned them into an airline business and also expanded in the liquor sector. But as the global downfall hit the country in 2012, Mallya purchased Air Deccan in order to gain profits. The purchase caused him to take loans from 17 banks. Air Deccan as well as Kingfisher failed to gain the amount which he has taken from the banks as loans. Due to this, he was never able to pay his debts. SBI loaned him the largest amount than other banks, of 1,600. And when no act was seen by Vijay Mallya, SBI declared Vijay Mallya as Loan Defaulter and asked for an investigation against him.
Vijay Mallya escaped to Britain before his arrest in 2016. Though now he was imprisoned.

The Satyam Computers was a scam of 14000 crores during the years from 2008 to 2015. The scam is also known as the biggest corporate fraud in India. Satyam Computers was established in 1987 and was registered on the Bombay Stock Exchange. The company was established by B. Ramalinga Raju in Hyderabad. The company was the jewel in the IT industry. After some time, the real estate industry hit a boom. The boom attracted Ramalinga so later on he purchased two properties in real estate, named Mayte’s Infrastructures and Mayte’s Properties. To mislead the documents, Ramalinga started mispresenting the accounts of Satyam Computers. This misled the revenues, operating profits, etc, and by this Ramalinga showed his company good investments. This attracted investors to invest in the company of Satyam Computers. Ramalinga then used the gained money from Satyam Computers to purchase shares which increased the growth in the share market. Ramalinga also made fake invoices for Satyam Computers. But to hide the profit statements, Ramalinga made fake bank statements, stating the money was placed in cash reserve. But his master plan failed when real estate hit bottom and came down due to the 2008 recession. This led to the breakdown in the shares of Ramalinga which left Ramalinga with no money.

Harshad Mehta Scam is a well-known scam all over the country. It was a scam committed by one man, Harshad Mehta, who himself took the whole stock market down. He took advantage of the loopholes in the system and gained money for his personal profits. Harshad Mehta used the concept of RFD, also known as Ready Forward Deals. RFD works on the short-term loan where the government takes the securities for big projects and loans money through brokers. According to the Reserve Bank of India (RBI), the check must be issued in the name of the government, but Harshad Mehta issued checks, in his name, and broker’s name and used this money in the stock market for his personal gains. On 23rd April 1992, Sucheta Dalal of Time of India, who had been investing in Harshad Mehta for a long time, got all the proof against him. Harshad Mehta was then charged with 5000 Crore fraud.