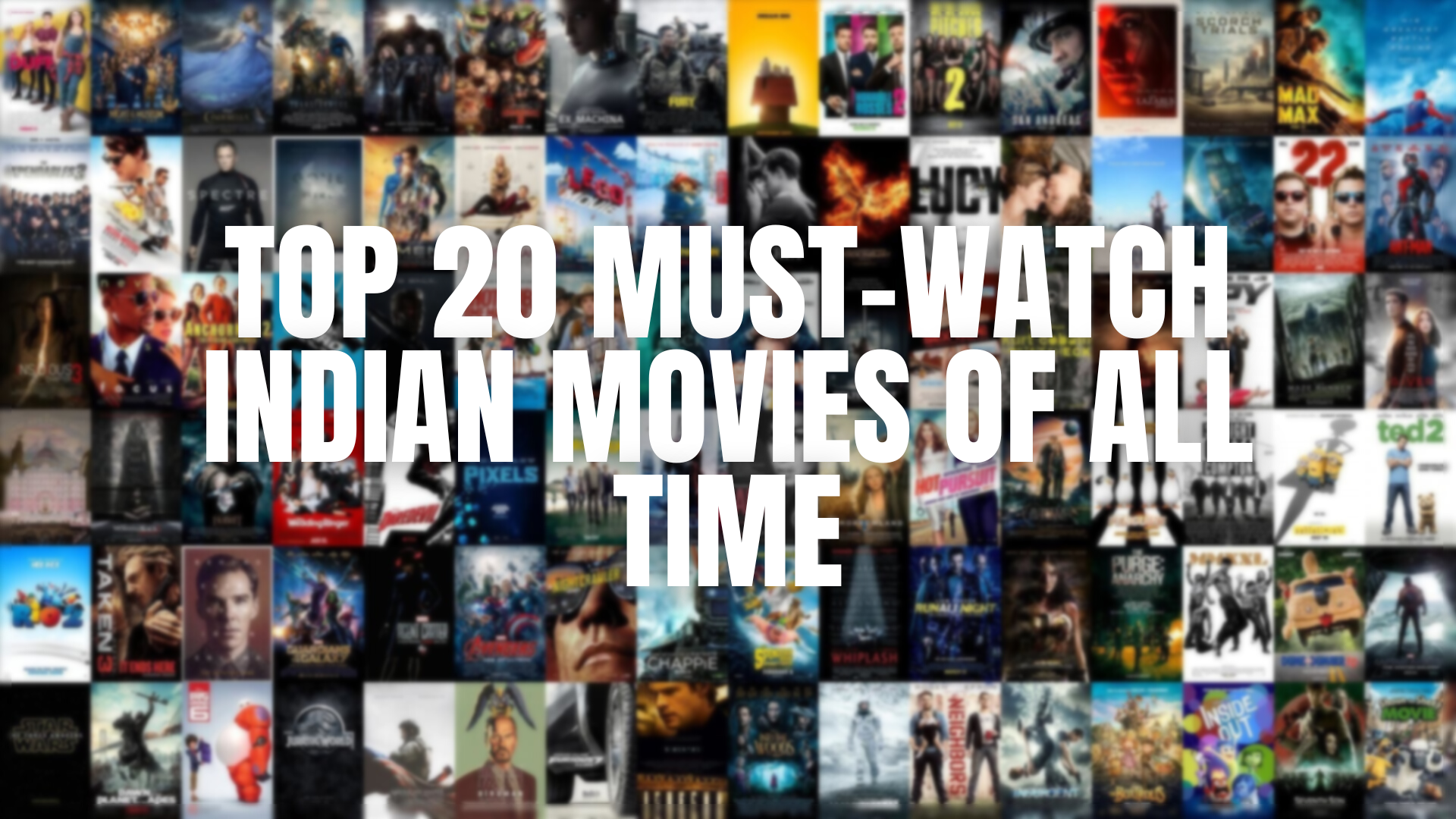 Sholay is a film about two thieves, Jai(Amitabh) and Veeru(Dharmendra), which were hired by a retired police officer(Sanjeev Kumar) to catch a ruthless dacoit(Amjad Khan). The dacoit forces the villagers to pay tax and if not then kills the innocent ones. To stop this act, the film shows the rescue of the dacoit. The female starring is starred by Hema Malini and Jaya Bhaduri as the love interests of Jai and Veeru, Radha, and Basanti. The film is directed by Ramesh Sippy and produced by father G.S. Sippy. The film is considered a classic and one of the best movies in India.

Gangs of Wasseypur is a crime-action film directed by Anurag Kashyap. The film is centered on the coal mafia of Dhanbad which shows the rude underlying power struggles and politics. The film is based on full crime. It stars Manoj Bajpayee, Richa Chadda, Reema Sen, Piyush Mishra, and Nawazuddin Siddiqui. Although the film is a Hindi version of the Tamil film – Subhramanyam.

Hera Pheri is a comedy-drama directed by Priyadarshan. The film stars Akshay Kumar as Raju, Sunil Shetty as Shyam, Paresh Rawal as Babu Rao, and Tabu as Anuradha. The film shows how an unemployed simple living high thinking man takes a shortcut to earn a big amount of money. Over the years the film is a cult classic.

Dilwale Dulhania Le Jayenge, also known as DDLJ, is a famous romantic film that stars Shahrukh Khan, and Kajol. The film is based on the drama which emphasizes the love story of Raj and Simran. They fall in love with each other, but their families clash with this act. The movie is directed by Aditya Chopra and produced by his father Yash Chopra under the banner of Yash Raj Films. The film also holds gorgeous scenes of Switzerland.

Taare Zameen Par is a film about an 8-year-old boy, who suffered from dyslexia. The film is directed and produced by Aamir Khan and stars Khan himself, along with Darsheel Safary in the lead role, Tanay Chheda, Vipin Sharma, and Tisca Chopra. The film shows how a small kid copes with the harsh behavior of people around him and proves everyone wrong in the end. Although it also shows how a teacher can play a very important role in a student’s life.

Kabhi Khushi Kabhie Ghum is a film based on a family drama. It shows how a boy from a big family with big principles turns his path to live his life in his way and takes his life’s decisions on his own. But in the end, everything falls in the right place. The film stars Amitabh Bachchan, Jaya Bhaduri, Shahrukh Khan, Kajol, Hrithik Roshan, and Kareena Kapoor. It is directed by Karan Johar and produced by Yash Johar. The film became very successful at the box office.

Dangal is a biographical portrayal of a wrestling champion Babita Phogat. The film shows the journey of becoming India’s first female wrestler. The ups and downs a small girl goes through in her early life to live a life on her terms and conditions. The film also shows how a girl needs her father to stand for her when everyone leaves her. The film is directed by Nilesh Tiwari and produced by Aamir Khan and Kiran Rao under Aamir Khan Productions with Siddharth Roy Kapoor and The Walt Disney Company India. It stars Fatima Sana Shaikh and Sanya Malhotra. The film won many awards including Best Film, Best Actor, Best Director, and Best Action Award.

Drishyam is a remake of the 2013 Malayalam-Language film with the same name. The film is a suspense thriller about a girl who escapes from a rape attempt by the commissioner’s son and falsely murders the boy. The film focuses on the little things and shows how a father could do anything to save his family. The film stars Ajay Devgn, Tabu, and Shriya Saran in the lead roles. It is directed by Nishikant Kamat.

Zindagi Na Milegi Dobara, also known as ZNMD, is a comedy film that portrayed 3 friends who travel to Spain to enjoy their Bachler’s Party. On the trip, they decide to conquer their particular fears, solve their problems and become close to each other like before. The film cinematograph Spain and their road trip. The film is directed by Joya Akhtar and produced by Farhan Akhtar. It stars Hrithik Roshan, Farhan Akhtar, and Abhay Deol as the lead roles along with Katrina Kaif and Kalki Koechlin as the supporters.

URI is a fictionally dramatized account of the true events of the retaliation of the 2016 Uri Attack. The film shows the complete story and reason behind the Uri attack. The film stars Vicky Kaushal along with Yami Gautam, Mohit Raina, Kirti Kulhari, and Paresh Rawal, where Vicky leads the role of Major Vihaan Singh Shergill. The film is directed by Aditya Dhar and produced by Ronnie Screwvala, which is released under the banner of RSVP Movies.

Fanaa is a romantic movie that was portrayed in thriller form. The film depicted two lovers who loved each other which became heavy on them. Fanaa means destroyed, the film promoted the tagline “destroyed in love”. It stars Aamir Khan and Kajol, who collaborated after the film “Ishq”. The film was directed by Kunal Kohli and produced by Aditya Chopra and Yash Chopra, under the banner of Yash Raj Films.

The Lunchbox is a romantic film based on a lunchbox friendship that converts into love. The film is written and directed by Ritesh Batra and produced by Anurag Kashyap, Karan Johar, and Guneet Monga under the banner of UTV Movies Pictures, Dharma Productions. The film is about a lady who delivers lunchboxes in the city, who mistakenly delivers the wrong lunchbox and writes a letter to that person and gradually they both fall in love with each other. The film stars Irfan Khan and Nimrat Kaur in the lead role alongside Bharti Achrekar, and Nawazuddin Siddiqui.

Lagaan is a drama film that portrays the time when India was under the control of Britishers. The film shows the torture by the Britishers over the matter of money/tax. Indians were burdened under the weight of taxes which made their life dreadful. The film stars Aamir Khan in the lead role, who fights for Indians and frees them from torture. It portrays a city in Central India, alongside debutant Gracy Singh and British actors Rachel Sheiley and Paul Blackthorne. The film is directed by Ashutosh Gowairker and produced by Aamir Khan.

Barfi is a pure drama film that stars Ranbir Kapoor, Ileana D’Cruz, and Priyanka Chopra as the lead roles and Shahrukh Shukla, Ashish Vidyarthi, and Jissu Sengupta as the supporting roles. The film is about Barfi Johnson(Ranbir Kapoor), who makes two female friends Shruti Ghosh(Ileana D’Cruz) and Jhimli Chatterjee(Priyanka Chopra), and is chased by the police officer Inspector Sudhanshu Dutta(Shahrukh Shukla). The film is full of comedy and drama about a young boy. The film is directed by Anurag Basu and produced by Siddharth Roy Kapoor and Ronnie Screwvala under UTV pictures.

Jodha Akbar is an ancient era film that depicts Maharani Jodha Bai and Shahanshah Akbar. The lead role was played by Aishwarya Rai and Hrithik Roshan. The film shows how Akbar fell in love with Princess Jodha Bai and married her. The film is all about the romance and bond of Jodha and Akbar. It is directed by Ashutosh Gowarikar.

3 Idiots is a comedy film which is directed by Rajkumar Hirani and produced by Vidhu Vinod Chopra. The film is about 3 students who are studying in an Engineering college. In their college journey they enjoy, do stupid things and show how students go through the mental pressure of the society of our education system. The film is based on Chetan Bhagat’s novel, Five Point Someone. The film stars Aamir Khan, R. Madhvan, and Sharman Joshi along with Kareena Kapoor.

Dil Chahta Hai is a romantic film based on the lives of three childhood best friends. The film is directed by Farhan Akhtar and produced by Ritesh Sidhwani under the Excel Entertainment banner. The film focuses on the romantic lives of these graduating friends who find their reasons for living. The film stars Aamir Khan, Saif Ali Khan, and Akshay Khanna in the lead roles and Preity Zinta, Dimple Kapadia, and Sonali Kulkarni in the supporting roles.

Bajirao Mastani is an epic historical romance Bajirao Peshwa and Mastani. It shows how Bajirao Peshwa falls in love with a Mastani. The film is directed by Sanjay Leela Bhansali and produced jointly by Bhansali himself and Eros Entertainment. It stars Ranveer Singh as the Peshwa, Deepika Padukone as Mastani, and Priyanka Chopra as the wife of Peshwa.

Top 10 Best Romantic Bollywood Movies That One Should Definitely Watch