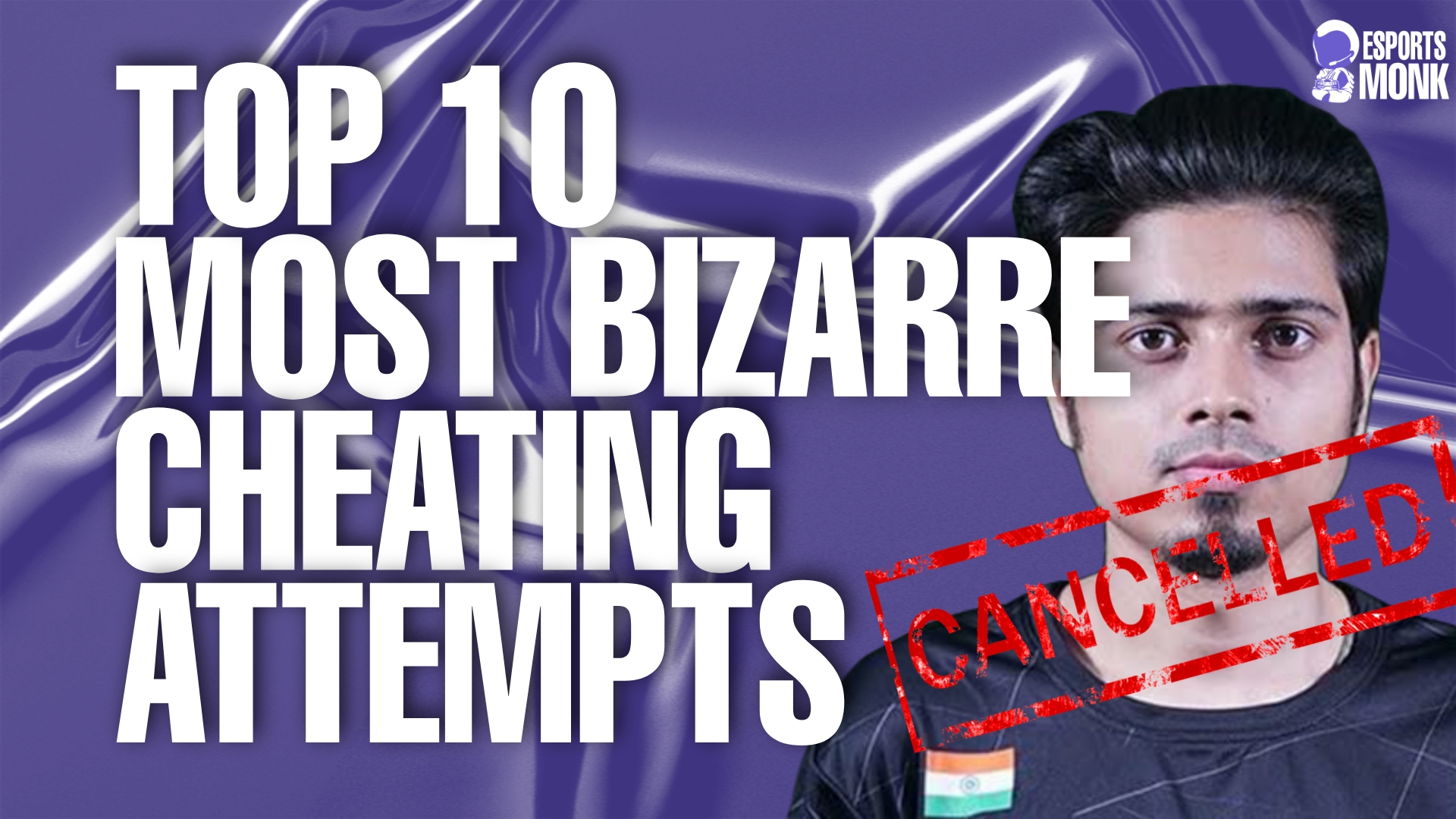 Cheating can be defined as the most unprofessional and anti-sportsmanship act, especially when you have your fans and viewers supporting your journey, it can be extremely ungrateful to betray your profession. With this article, we present you top 10 most bizarre cheating moments in Esports.

During a match against Life Coach against the Pinnacle 2 Tournament in January 2015, Hosty who is a former Hearthstone Pro decided to stream snipe his own match, regardless of the 10 mins broadcast delay. After some of Hosty’s match some Hearthstone pros like Kripparrian noticed the reflection of the broadcast in Hosty’s background via his cam. His attempt to cheat was caught flawlessly and was later released by Team Archon’s roster after just a few hours of the news outbreak.

In July 2016 a Pichu player was accused of hacking the console at a local tournament. He successfully ran a hacked version of melee that he had created on a wii by an SD card. This unfair trick ended up destroying top-notch players with his bottom-tier character. This was the first-ever case of an altered melee and potentially hacking of the game which made a huge buzz in the community.

During the 2019 Red Bull MEO finals, he was booked under unfair means because of communicating with his manager during the match. The plan was carried out cleanly until Gregg decided to remove the earplug that he used for communication. Even after a cheating attempt, Gregg ended up losing the match and ESL declared the impeachment of the athlete from the tournament.

A classic example of international cheating and lame exploitation is the 2015 Halo World Championship Series when a player named “Hidden Reach” entered the 3rd Asian Qualifier, under the alias team Meesang and bombarded the tournament with cheating. The team eventually fought their way to game 5 of the semi-finals, where they decided to bust out one of their exploits on live stream and ended up winning the match. Shortly after the game, ESL disqualified team Meesang for cheating and exploitation.

Probably one of the biggest cheating scandals that Player Unknown’s Battleground can never recover from is the mass cheating attempt of 2018, when a bunch of pros exploited Esports Events by using RadarHack – a hack that reveals’s enemy location. This gave a huge advantage to the cheating party, however PUBG shortly managed the situation and the loophole was immediately stopped. THC was among 10 other accused names.

At 2016 European Summit 5 Dota 2 Grand Finals, team Virtus Pro was caught cheating against Ad Finnum. The act was carried out when Aloha from team Virtus Pro got disconnected mid-match and team Ad Finnum was kind enough to lend them enough time to resolve the issue. Though, Virtus Pro decided to switch Aloha for Vegas Squadrun’s Noone who proceeded to continue the match. After a Reddit user pointed this out the team was disqualified immediately.

Could there be anything more embarrassing than getting banned during a tournament? Unlucky for Emilio who got banned during the Frag Bite Masters Online Qualifiers against Hell Raisers on account of cheating. Emilio initially tried to blame this situation on a friend, however after a 48-hour window with Valve, Team Property decided to fire him.

14-year-old Fortnite player and streamer Kquit also got booted from the game mid-match while playing a tournament. He ended up blaming one of his friends for the incident, but the Internet was not buying this story, another Fortnite player came up with pretty damning evidence including a chat between Kquit and aim assist selling account. Upon investigation, some questionable applications were detected on Kquit’s desktop getting him canceled from the community. Lucky for Kquit, his young age would let him restart his career at ease.

One of the most recent and popular Battlegrounds Mobile India (PUBG India) hacking cases was that of Enigma Saggy, who was caught red-handed cheating on his YouTube stream. The athlete was casually streaming his gameplay, when he started encountering bad ping leading him to minimize the game, surely enough there was a Winios Zero BGMI IOS hack running in the background. Saggy apologized for his actions via a YouTube video.

The Curse of Forsaken

If you don’t know who Forsaken is, welcome to heaven. Forsaken was an Optic India CSGO pro athlete who was caught red-handed during the Xtreme Land’s Zowie Asia tournament 2018. It was when Forsaken managed to have multiple frags against team RevolutionVN and the admin decided to check Forsaken’s PC where he found the world-famous “word.exe” file that accommodated Forsaken’s hack. What gets us every time though, is Marzil’s face full of horror right when the admin was inspecting. The man single-handedly ruined India’s CSGO scene and OpTic Gaming decided to withdraw its franchisee from the country.

So these were the Top 10 most bizarre cheating moments caught in Esports. Do let us know your favourite Forsaken memes in the comments.

RISE OF ESPORTS INDUSTRY IN INDIA